Well that's it, that's all - I m fini with the basic training aspect of my military career. The goodbyes were awful, there were tears - a lot of them - and more tears. In the end Jamie and I were able to get off base and off the island. Our facebook status' are all filled with sad messages, and we are all suffering from disconnect and reintegration back into regular society. I have a million pics to post, sadly I am stuck in a hotel room in Kelowna and have no desire to go through the 500 or so that I've accumulated so you will all have to wait a few days or so.

As I mentioned before I am in Kelowna so I should be home tomorrow. Funny thing is that I have no home - I think I've secured something in the way of accommodation for the time being and perhaps something for the near future but who knows where I will end up. As for my employment - that is also up in the air. I thought I would be working at the ship's office for the 8 months before my next phase of training in Quebec City, but I've just received an email asking me if I would like to go back to Victoria for an 8 month stint with the Port Security Unit. I also tried to look into moving to the east, Ottawa or Quebec City with the military or even just with a good job.

So, now I have a huge decision to make, and I need to make it fast - crap! I hate this all so very much. If anyone out there has a nice paying job preferably in Ottawa or Quebec City let me know - I'm game for almost anything!

Alright, I'm off to play more on facebook. We can catch up later. 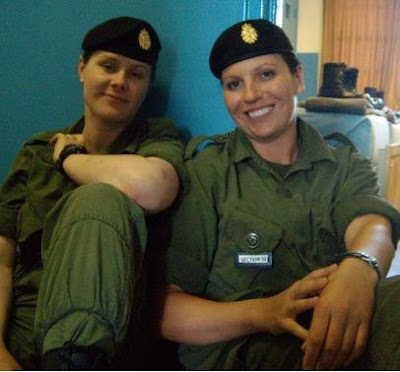 Jamie and I in the hall outside my room - we were told to be out there at a specific time and much to our surprise we waited there for a good 1/2 an hour before anything happened. But, hey that's the military's motto - "Hurry Up and Wait" so we did. (We are wearing our greens - aka our combats) 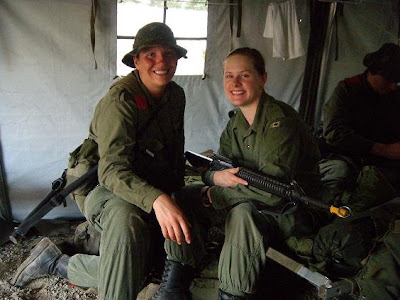 Jamie and I in the field - I am sitting on my cot (this was the 3rd time in the field so we slept in mod tents on cots unlike the first two times where we slept in Hootchies in the dirt) And yes, that is my rifle. 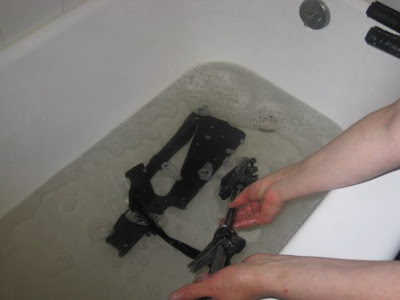 I am giving it a bath after the field (I named it the QE II) - they told us to take it into the shower but I thought to take it one step further.... Gehlert almost killed me when she saw this.... hahahahaha! 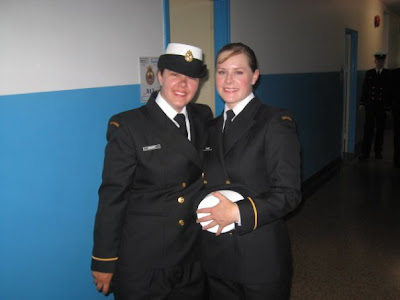 The aforementioned Gehlert and I on grad day in the hallway - we look so fancy! (we are wearing our DEUs ) 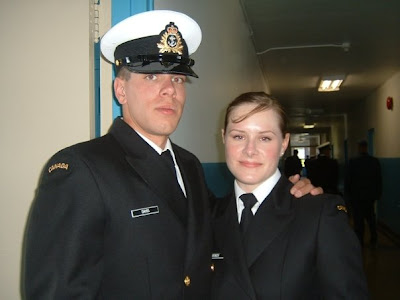 Davis and I in the hall before grad - he looks so daper! 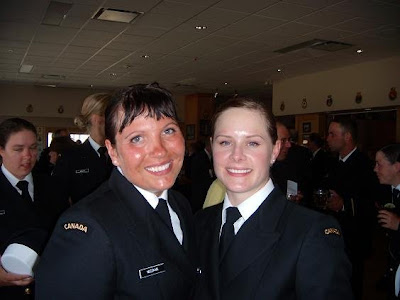 Jamie and I at the Gun room after the grad parade - Acting Sub Lieutenants at last!!! 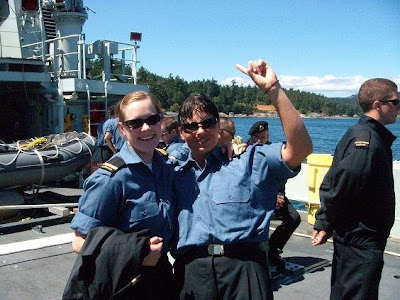 In the Navy at last!!!! Jamie and I on the sweep deck the HMCS NANAIMO for our day sail - see our fat stripes on our shoulders... wicked! (here we are wearing our Naval Combats)
Posted by Linda at 01:17

I love the pics, it's so great to see you smiling in all of them! I'd also like to give props on how you still managed to accessorize with your greens (note the earrings)!

the accessorizing was quite necesary I assure you. I mean how else to set apart one's self when everyone has the same outfit and shoes?