Week in the Field

Well, I did it!!! I managed to get my ass in gear and work through the most grueling, scariest, most nerve wracking weeks of my life... I passed my final assessment in this damn course I'm on. The week started on Monday with the departure for the "field"... basically we packed up our rucksacks, got on a bus, drove into the woods and hunkered down for a week of hell. We were up at 5, running 3 hours taskings(missions) for 2 days in preparation for the assessment taskings starting on Wednesday, eating random things out of these god awful things called IMPs - individual meal packs... stuff made 4 years ago and vacuum packed into foil packets.. with some extras like fruit drink crystals, chocolate bars (in the lunches), compacted bread, peanut butter and cookies or crackers... so I pretty much ate chocolate bars, crackers and canned fruit for the entire week.... then it was off to bed nearish midnight. After were were all asleep and recovering from our long long day we got to do this wonderful thing called a "stand - to" where someone (people caleld Fed Platoon who attack us during our taskings) comes and attacks your camp with crazy amounts of blank ammo and the ENTIRE camp has to get up and defend it for an hour or so... it was great! (I'm only being half sarcastic)

Wednesday came and our assessments began - we had 16 members in our group and each one had a 3 hour task to lead. Fun thing was that we had to create a complete set (15 steps) of written orders (that were marked) to support our leadership and get briefed from the Officer in Command - this was also very scary and realistic! So Wednesday came and went, 7 members got their turn to lead and I became a lackey for the day, I shot when I was told to, screamed "Yes IC (stands for in charge, that's what we refered to them as) a lot... and then ran around the woods attacking people, looking for downed pilots, conducting reconnaissance missions, setting up camp security, setting up observation posts etc etc etc... it was tough work. Then it was Thursday and it was my turn (you didn't know it was your turn until 2 hours prior). My mission was search and rescue and I was scared to hell that I could fail and then get kicked off the course... as this was it, your entire military career hinged on this one bloody task... anyhoo, I managed to draw a really funny assessor and got through it with a really good mark... After me we had about 6 more missions left plus 2 re- tests, and 1 re-re-test (if you failed they gave you 2 more chances to pass). Needless to say with 3 hours of sleep (if we were lucky) and crazy amounts of running around in full gear with rifles and helmets 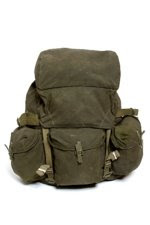 shooting at people all day we were all quite tired.

Yesterday (Saturday) came and we were on our 13km rucksack march. Now for those of you who don't know what a rucksack is... it is a giant backpack full of gear that has several things strapped to it... like an air mattress and a bag containing 2 sleeping bags, a ground sheet, a bivy bag (the waterproof bag that your sleeping bags go into) and a wash basin shoved into it. In any case, it weighs a lot.. like 40-50 lbs and we had to wear this, and our combats plus webbing (a belt thingy that has several packs attached and a set of cutlery and your magazine pouches(think bullets) and your water bottle) and your helmet and your rifle (the picture to the left is the rucksack without the sleeping bag and air mattess attachement which would be on the underside of it)... while wearing combat boots. The march started at 6 am and ended about 8:26... I was within the front 12 people for the entire thing and was ridiculously, even deliriously happy when I finished... my feet took quite a beating but I can still walk and am still smiling.... so I guess it isn't all bad!

Graduation parade is next Saturday and my mom and sister plus some others are on their way out to see me receive my Queen's Commission... I can't hardly WAIT!!!

Have you had to wear those shoes that are too big yet?? I'm been wondering about those for a while now...

You rule Linda!! Congrats! We'll party hard when you're back!!

I have to say, my dear, that the middle paragraph sounded like ridiculous fun. I'm really glad you were still smiling after all that!

You should be back any day now, do you have an exact date???