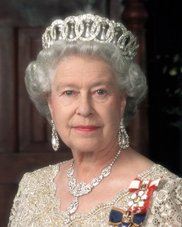 After having watched the program aired on CBC this evening, I realized just how much I really love the Queen. I love her pearls and her hats, I especially love her corgi dogs and love of horses. Her unending stamina and kind words, she is every bit what anyone would think to be a Queen. Over the past 54 years she has reigned over the Commonwealth, and through my 24 years alive I have been proud to have her as my Queen.

Upon re-hearing the speech she made during her trip last year to our fair land, she remarked that during a visit years ago her mother had proclaimed that Canada has always felt like a home away from home, and 60 some odd years later the statement still rings true. Her exact words...

"Ladies and gentlemen, six decades later, it still does, and it is good to be back."

Call me ridiculous, but honestly I had tears in my eyes.

In my life I have had the good fortune of seeing her in person twice. Once when I was only 8 years old. She came to Calgary and was of course staying at the Palliser Hotel. Being that my mother also loves Her Majesty we were able to skip school and be at the hotel for her arrival. My sisters and I were of course dressed up with our hair curled and in ribbons (my mother LOVES her ribbons). We watched in awe as Her Majesty walked through the doors and made her way to the elevators, pausing to accept flowers. A while later she descended the stairs to the lobby on her way to the Oval room. As my younger sister Amy was only 6 at the time, she was tiring quickly and was sitting on the floor playing with her cars, her ribbon was falling out of her hair and her pretty pink dress and petticoats were spread out about her. As she passed us where we stood in the front row, me standing quietly beside my mother and Amy on the floor, she (I'm serious here) gazed at the two of us, winked and smiled. That sealed it for me, I was starstruck. The other occasion was last year at the Saddledome. Although I wasn't as close to her as previsouly, still I saw her.

One other thing that I hold near and dear in my heart, "Raised and trained by the RCMP in Saskatchewan, Burmese was given to the Queen in 1969. It's said that after the horse, which she rode during official events for 18 years, was retired she attended celebrations in a carriage."

Often time I get an email asking who I might have lunch with if I could have it with anyone, past or present. Without a doubt it would be her.

I'm not sure if I have been as eloquent as I could be in this posting, but I'm sure I got my feelings across.

God Save the Queen. 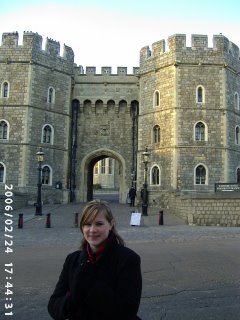