This is awesome... I have so many ridiculous power cables that I continuously lug around with me every time I move (which stands at a record 4 times this year!)
It is definitely going on my must buy list.
Posted by Linda at 12:30 No comments:

I don't know why we needed a study to tell us this.... isn't it just common sense?
Posted by Linda at 12:24 No comments:

Every morning I am in my office (seems to be less and less these days :) I scroll through my list of blogs I read.  I like to keep up with people back home, and abroad as well a big bunch of people I've never met.  They all write interesting things, stuff that I like to incorporate into my own life.  The list below is from my newest fav - Carrie... on the cheap.  She writes about finances, and as my new career path is taking me down the finance path (yay!) I've really begun to get interested and have decided to pursue my next degree in accounting . finance.  She's listed a financial bucket -list of sorts - I love lists!!  Anyways, I've always kept a list of goals on my computer, financial ones included, but I've posted hers as I think all the points are really quite relevant.  I've added a few of my bits for fun.
So there we go, finances are fun!  Gotta go for dinner, ciao! 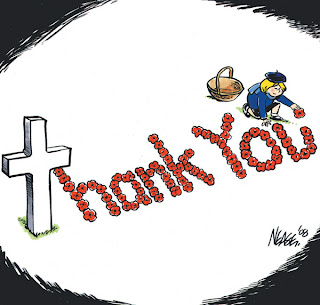 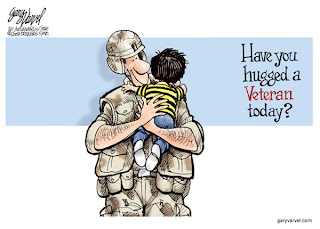 With proud thanksgiving, a mother for her children,
England mourns for her dead across the sea.
Flesh of her flesh they were, spirit of her spirit,
Fallen in the cause of the free.

Solemn the drums thrill; Death august and royal
Sings sorrow up into immortal spheres,
There is music in the midst of desolation
And a glory that shines upon our tears.

They went with songs to the battle, they were young,
Straight of limb, true of eye, steady and aglow.
They were staunch to the end against odds uncounted;
They fell with their faces to the foe.

They shall grow not old, as we that are left grow old:
Age shall not weary them, nor the years contemn.
At the going down of the sun and in the morning
We will remember them.

They mingle not with their laughing comrades again;
They sit no more at familiar tables of home;
They have no lot in our labour of the day-time;
They sleep beyond England's foam.

But where our desires are and our hopes profound,
Felt as a well-spring that is hidden from sight,
To the innermost heart of their own land they are known
As the stars are known to the Night;

This week is the first week that Pete was in the field - for those non-military types think of it as crazy hard core camping - Army style.  Basically they are testing his navigation skills whilst experimenting with sleep deprivation.  I think each day they navigate 32 km through the New Brunswick bush, with (I'm told) swamps on top of hills and killer insects.  Although, the swamps should be pretty much frozen, and the bugs should be almost all dead.   They also have to do some night navigation - which I can tell you from experience that it is both slow going and ridiculously difficult, mostly because you can't see and spend the night being wacked in the face with branches and falling over logs and in ditches.  As for being attacked and fighting off enemies, I'm assuming it will be a nightly occurrence.  The instructors love an opportunity to screw over their instructees... poor bastards!

On my end of it (prepare yourself, this is quite sappy) this is probably the longest we've ever gone without speaking to each other.  We tend to talk a few times a day, and text each other somewhere near 20 times... it's hard when you never live in the same province.

Last weekend, I drove up to Ottawa for the weekend.  Jamie was in town for a "field-trip"  She came down a day early and we got to spend the day talking.  It was wonderful to catch up with her again - I haven't seen her since her trip out to Vic last March.  We spent the entire night talking, over sushi, over our favourite dessert and almost all night.  We opted to stay at the Chateau Laurier - after living in military barracks for as long as we have, we deserved the luxury.  The drive was killer though, almost 5 hours each way - I'd do it any day for time with Jamie though.  Meanwhile here in Borden, life is as regular as usual.  I have a few more projects to work on for the head instructor, some more meetings to attend, not much new.   I did just finish a marathon 90 minute Yoga session though... tough stuff!

Next week is Remembrance Day.  I've been given the option to attend any ceremony I like.  Being that it is the Navy's 100 year Anniversary and we have this "Bring the Navy to the People" theme going, I've decided to attend the ceremony in my in-law's town.  I'm assuming I'll be one of few in uniform but as I was working last year, this year is my first.
Posted by Linda at 20:35 No comments: