This might just be the neatest app I've ever heard of.... well, that and the one that tells you where the nearest Starbucks is.  Damn you Crackberry and your inferior web browsing capabilities!
Posted by Linda at 18:49 No comments:

Last tuesday I experienced an epic failure at the gym, I was set to run 16km - not a new thing to my legs - but for the entire time I was running I felt awful.  My legs were tired, my calves were burning, my lungs were unhappy... WTF?! I stumbled off the treadmill with only 7.5km completed... it was crap, I was pissed off and I moped for the rest of the evening.

Fast forward to yesterday.  I had originally planned on running outside, the weather was amazing all week and I was looking forward to the sun shine.  Saturday rolled around and it was cold and windy, so I opted to try the treadmill again.  This time I rocked my 16km.  My legs were awesome until about 13 kms in when they started to get a bit fatigued, and my lungs were great... quite the difference from tuesday I would say!

Today was suppose to be a quick recovery run but I decided some power cardio-burn yoga would be better for my hamstrings - and I was right, it felt wonderful.

This week I have some more 6.5 km runs scheduled and a great big french test on thursday - yikes!  I've had the test on my goals list for ages and I really would like to get an "exempt" (meaning I scored high enough that my bilingual status will be good forever).  However, my french has been,- how you say - non-existant since I graduated so I may not get that E.... oh well, anything would be beneficial from a job standpoint so off I go.

34 days until I leave Borden for Quebec City!!!  Although leaving my cosy private room, my car and the closeness of my awesome in-laws is not ideal,  I will be finally completing my training and getting a promotion - another stripe, and a pay raise!  Hooray!!

Back to studying I go, night.
Posted by Linda at 19:27 No comments:

Way back in University I worked 2 jobs and had a full time class load.  Needless to say, I didn't sleep a lot and was pretty hooked on caffeine... These days I sleep more and only have 1 job, but I still like my caffeine.


Where was I going with this, oh yeah - Second Cup.


Because I worked at an Opto office near a large outlet mall type area in Calgary that also had numerous coffee shop options, I would often stop at Second Cup and grab a crème brulée ristretto before heading to my night class - it was delicious and it was my first foray into the world of coffee. But sadly, one day I found out that they had discontinued the creamy cinnamon syrup used in the ristretto :(  and I had to get a new drink.  I was pretty upset when I found out and then switched over to Starbucks because it just seemed easier somehow (not really sure how that makes sense).  Later after we graduated when I lived with Heather, we had a great supply from Starbucks, so I continued to drink their coffee.  Then I moved to Victoria for the military and as there are ZERO second cup stores on the island I remained dedicated to Starbucks.  Now however, I am in Ontario and there are some Second Cup stores but besides the Maple Latte I didn't have a real reason to go.  A few weekends ago I was visiting Pete in Fredericton and we popped into a Second Cup for my coffee (didn't see any Starbucks in the vicinity) and they had a new drink feature - The Cinnamon Spice Latte.  I tried it, and I am amazed at how similar it tastes to my beloved crème brulée ristretto - hooray!


So in short, I have my drink back,  it makes me very happy, and it helps me to get through my crap essays- ughh, I've been struggling with this one all weekend, good thing it isn't due until Tuesday ;)


Short training / weather update - it's been grey and dreary all weekend.  I was suppose to run 16.5 km today but I have a severe dislike for running in the rain so I've decided to change it to a 5 km easy run on the treadmill on base tonight and the 16.5 km tomorrow after work. OK back to the essay :)
Posted by Linda at 14:06 No comments:

After a good amount of research P and I decided to take the plunge and sponsor a child through Plan Canada.  He picked South America as our preferred location and I sent in the request.  Now all we have to do is wait 2-4 weeks for the picture and profile of our child and voila- we are foster parents!  I'm amazed it took me this long to sign up,  $35 / month is not a lot of money, and with all the perks we get from being in the military we are quite certain it won't even change my budget.
The neat thing is that now I can write letters in Spanish again.  It's been a while since I actually used my languages, and with my upcoming french profile test ( 12 days from now - yikes!) I guess this marks my return to my languages - thank goodness. 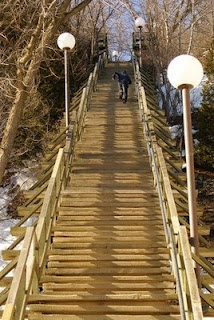 I've also been course loaded on my next course in Quebec City... I'm rather excited to get back to the 400 and the gorgeous atmosphere that is QC... I'll be (hopefully) driving home and staying for a day or two before flying out east and then back home for a week or so afterwards.  P has his course in Shilo in May and then back to Gagetown in september.  We are trying to arrange a stay in Ontario at the cottage for a week or so in August - wish us luck ;)
Due to schedule changes this year we have also decided that 30 April 2011 will - barring any new  training schedule changes - be our wedding date.  I have a shopping trip booked in 2 weeks with an Aunt to the garment district of T.O. for my dress material and if I have enough time in April when I am home I will consult with my dressmaker.  I do have a year to actually plan this thing so I'm taking it slowly.  I have a pretty good idea of how this wedding will pan out and I don't see it taking up much of my time to plan, logistics are my speciality these days after all.
I should get back to the books though, I have an essay due on tuesday and I have a lot of work to do.  I'm hanging out at the in-laws' this weekend, I'm on duty next week (including the weekend) so I'm stuck on base, or very close to it - boo!
Posted by Linda at 15:34 No comments: