Let me introduce you to.... 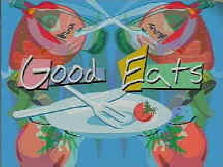 One of my favorite men... no - it's not what you think it is, but rather, a posting dedicated to rambling about a great culinary genius...

If you haven't had the pleasure of watching the tv cooking show "Good Eats"(food tv wednesdays at 20:30 - or sundays 15:00 MST) allow me to introduce you. Good Eats is a cooking show like no other. Hosted by its creator and writer, Alton Brown, the show combines the likes of the History Channel, Discovery Channel, Bill Nye the Science Guy and a pinch of VH1 all rolled into one great half hour.

Not only is he super intelligent, but also hilarious. It's his bizarre way of conducting his show that I love, plus he has the best cookware / ways of using stuff - EVER. Case in point, his measure cups / plunger thingys, and his affinity for creating multitaskers out of all kitchen equipment - after all the only uni-tasker allowed in the kitchen is our friend the fire extinguisher.

In many ways he is the perfect mix of what a guy should be - funny, smart, good in the kitchen, full of suprises (I especially love suprises!), but still loves to play with fire and create wacky stuff. Who else could devote a whole show to peas, keep me interested, let alone make me want to eat all of his concoctions? Who I ask you? Who?
Alton Brown - that's who.... (plus, he uses the word - thusly - I just love it!)

In any case his show is highly entertaining, even the show titles are crazy, he features such classics as: Art of Darkness, Pantry Raid, The Choke's on you, or who could forget the Cookie Raid or the great Deep Space Slime

I think I may have to go on a petit shopping spree and purchase all the wacky fun stuff I can - so I can just like AB (he even has DVDs!)

Happy Cooking to all! 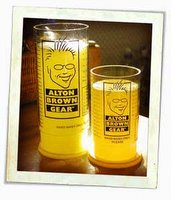 His wicked cool stand mixer
(I love the flames)

Hello Linda dear, this is great, it's so nice to see that someone else has just as many random and insane thoughts as I. Rob and I too have been fans of dear Mr. Brown for some time now and yes, the measuring cups are pure genius. Thought I'd let you know, I've got a wee something I brought back from QC for ya and, well, sort of forgot I had it... When are you at school that I can meet up with you?

PS - we should get together to talk about another man we both love - I think you know who I'm talking about - how's DFIA (aka dragon fly in amber) going?

no worries - I am a wee bit busy after school tomorrow - perhaps next week would be better - I'll email you later.... just think only 4 or 5 more weeks until you can read #2! YEAH!

No comments on the book choices (I'm sticking to travel, sports and history) but just wanted to confirm that AB rocks. If you google him, you will find that he has quite the following.

I love Alton. His show is one of my favorites, and that's saying something since I can be pretty picky when it comes to cooking shows. I have measuring cups just like that. They're great!