Alright so I had a huge plan to do Victoria Beckham's Book - "That Extra Half and Inch" as tonight is Jamie's (my new MBFF) Birthday Party, aptly named "Farewell to Feminity". Sadly I've discovered that I already featured that book in a previous Book of the Week. So now I'm stuck thinking about another book.

Oooh, just got an idea. As I mentioned, it was Jamie's birthday on Wednesday and her present was a book (of course) - so because I can't think of another Feminine type book to post I'll do the exact opposite... but really, knowing Jamie and I, it fits! 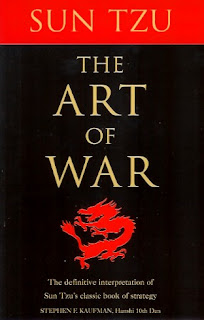 The book is "The Art of War" by Sun Tzu.

Here is what the publishers have to say:
Widely regarded as "The Oldest Military Treatise in the World," this landmark work covers principles of strategy, tactics, maneuvering, communication, and supplies; the use of terrain, fire, and the seasons of the year; the classification and utilization of spies; the treatment of soldiers, including captives, all have a modern ring to them.

And now from Wikipedia:

The Art of War is one of the oldest books on military strategy in the world. It is the first and one of the most successful works on strategy and has had a huge influence on Eastern and Western military thinking, business tactics, and beyond. Sun Tzu was the first to recognize the importance of positioning in strategy and that position is affected both by objective conditions in the physical environment and the subjective opinions of competitive actors in that environment. He taught that strategy was not planning in the sense of working through a to-do list, but rather that it requires quickly responding appropriately to changing conditions. Planning works in a controlled but competitive environment, and competing plans collide, creating situations that no one planned for.
Posted by Linda at 11:34