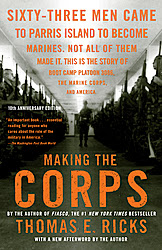 For obvious reasons I feel like this week I should do something with a military theme - well, that and the fact that Top Gun has been on TV every day. Therefore, I think I shall choose "Making the Corps" by Thomas E Ricks. I finished this one a few days ago as I felt the need to remind myself how Basic really was. I do recommend it to most of you, mainly because I am sure the only things you know about the Marines are what you see in movies. This book explains the mentality through the progress of the recruits in basic training. I am sure that you will all be very surprised to see how they make it!

Marines are different: distinct not only from ordinary U.S. citizens but from the ranks of the army, navy, and air force as well. The difference begins with boot camp at Parris Island, South Carolina, where the history and future of the United States Marine Corps intersect in the training of every new recruit. In Making the Corps, Ricks follows a platoon of young men through 11 grueling weeks of boot camp as their drill instructors indoctrinate them into the culture of the Few and the Proud. Many arrive at Parris Island undisciplined and apathetic; they leave as marines.
With the end of the cold war, the role of the American military has shifted in emphasis from making war to keeping peace. "The best way to see where the U.S. military is going is to look at the marines today," says Ricks, as the other armed forces have begun to emulate the marine model. To understand Parris Island--a central experience in the life of every marine--is to understand the ethos of the Marine Corps. Ricks examines the recent changes in the Standard Operating Procedures for Recruit Training (the bible of Parris Island), which indicate how the corps is dealing with critical social and political issues like race relations, gender equality, and sexual orientation. Making the Corps pierces the USMC's "sis-boom-bah" mythology to help outsiders understand this most esoteric and eccentric of U.S. armed forces. --Tim Hogan
Happy Friday!
And for more Marine fun, check out this blog I found...
"The Day to Day, semi-normal life of a Female Marine"
Posted by Linda at 10:53

Labels: Book of the Week, Marines

I love top gun, watched it last night, its just one of those movies that never get old. They don't make them like that anymore.

We should have a TOP GUN party... has Amir ever seen it I wonder?