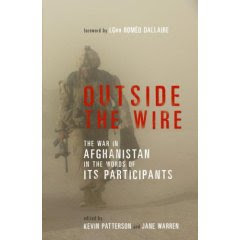 I can't lie and say I had a million different things to choose from for this week's edition - I'm feeling quite unimaginative. However, in keeping with my military theme and the fact that I am almost through this book - this is the pick for this week. In a nut shell the book is a collection of narratives written by people who have been to Afghanistan and were "outside the wire".

Anyways, it's pretty decent, the forward written by Lt. Gen. (Retired) Roméo Dallaire is one of the best things I've ever read, and most of the stories are quite substantial, including the letters from Nichola Goddard (a fellow Calgarian no doubt).

A remarkable collection of first-hand accounts written by soldiers, doctors and aid workers on the front lines of Canada’s war in Afghanistan.

Visceral, intimate and captivating in ways no other telling could be, Outside the Wire features nearly two dozen stories by Canadians on the front lines in Afghanistan, including the previously unpublished letters home of Captain Nichola Goddard, the first female NATO soldier killed in combat, and an introductory reflection by Roméo Dallaire.

Collected here are stories of battle and the more subtle engagements of this little-understood war: the tearful farewells; the shock of immersion into a culture that has been at war for thirty years; looking a suicide bomber in the eye the moment before he strikes; grappling with mortality in the Kandahar Field Hospital; and the unexpected humour that leavens life in a warzone. Throughout each piece the passion of those engaged in rebuilding this shattered country shines through, a glimmer of optimism and determination so rare in multinational military actions–and so particularly Canadian.

In Outside the Wire, award-winning author Kevin Patterson and co-editor Jane Warren have rediscovered the valour and horror of sacrifice in this, the definitive account of the modern Canadian experience of war.
After having read my little write up I feel like I haven't given this book the praise it deserves. A lot of people I have spoken to have confessed, or demonstrated their ignorance on the whole Afghanistan situation, therefore I think we should all endeavour to learn a bit more about the whole issue. Don't we owe our soldiers the courtesy of understanding why they are risking their lives? I think so.
Posted by Linda at 11:49