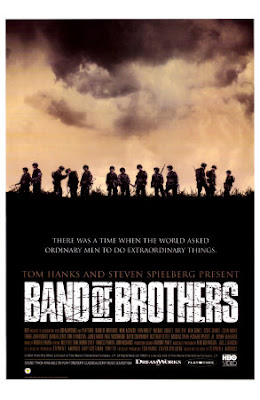 After last night's conclusion to the Band of Brothers Marathon - PS Kristen, you were so right about the heartbreak, it was awful and I very nearly cired through the whole thing... - I felt the need to feature the book version for Book of the Week. Written by Stephen Ambrose, it is a good read to be sure. Even if you just move on to the miniseries instead you will not be dissapointed. It was so well done, I am just speachless. Watch it, or read it - you will not be sorry you did, I guarantee.

From the Publisher:
As good a rifle company as any in the world, Easy Company, 506th Airborne Division, U.S. Army, kept getting the tough assignments -- responsible for everything from parachuting into France early D-Day morning to the capture of Hitler''s Eagle''s Nest at Berchtesgaden. In Band of Brothers, Ambrose tells of the men in this brave unit who fought, went hungry, froze, and died, a company that took 150 percent casualties and considered the Purple Heart a badge of office. Drawing on hours of interviews with survivors as well as the soldiers'' journals and letters, Stephen Ambrose recounts the stories, often in the men''s own words, of these American heroes
Posted by Linda at 12:09