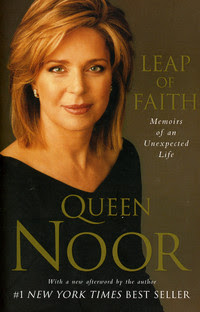 This week's entry for Book of the Week goes to a book that I first read way back when I was in France. I had zipped over to Geneva (my old stomping grounds) for a visit with my friend Marci who was working with the UN Human Rights Commision at the time. While she finished her work day I wondered around the town, visiting my old haunts and taking in the crisp and clean Swiss air. During my wanderings I popped into a bookstore and found this book. Before I read it, I had no clue about what the tenseness in the Middle East was really about. This book however, did wonders to open my eyes. It also feuled my fascination with all things ancient and I now have Jordan listed as one of my top ten countries to visit. When I came home for my surprise week home I gave it to my mom to read and she in turn bought a copy for our neighbour to read - see, this book is that good.

Anyways, I highly recommend it - plus you'll probably learn a thing or two, and isn't that the whole point anyways????

From Amazon:
Anyone who loved The King and I will readily warm to the love story of Queen Noor and the late King Hussein of Jordan. Born in America in 1951 as Lisa Halaby, Noor came from a wealthy, well-connected family and was part of Princeton's first co-ed class. Her father's aviation business produced a chance meeting with King Hussein in 1976, and a year or two later Noor realized the king was courting her. He was 41, she was 26. The rumor mills buzzed: was she the next Grace Kelly? Before long, the king renamed her Noor (light in Arabic), and she converted to Islam. They were married in the summer of 1978. From this point on, her story is mostly his, mainly covering his attempts to broker peace in the Middle East. There are meetings with Arafat, Saddam Hussein, American presidents and other leaders. Noor details Hussein's struggles to create Arab unity and his vision of peaceful coexistence with Israel. Her own activities developing village-based economic self-sufficiency projects and improving Jordan's medical, educational and cultural facilities take second place to her husband's struggles on the world stage. And while she occasionally acknowledges her domestic difficulties, Noor is careful not to allow personal problems to become any more than asides. Her pleasing memoir ends with the king's death after his struggle with cancer, although readers may suspect that this smart, courageous woman will remain a world presence for years to come.
Posted by Linda at 10:46

oooooooh! my movies showed up today....yeah!

I'll see if I can locate my copy if you feel the need to read....