Sobering Thoughts for a Sunday Afternoon

I promised a recap of Wednesday Evening's events and here it is, but I am tired and can't seem to get a grasp on the ability to formulate proper sentences, so it's in list form.
So there we go... the evening's wrap up in a nice tidy list... it was nerve racking, stressful, fun, meaningful and quite the proud moment in this Naval Cadet's career.

Now onto the "Sobering Thoughts" part of my title.K, I gotta clean the house and go to work... and do some pushups... 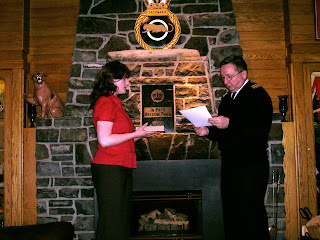 Swearing allegiance to my favourite Monarch by taking my oath, and yes that is the Bible I am holding. 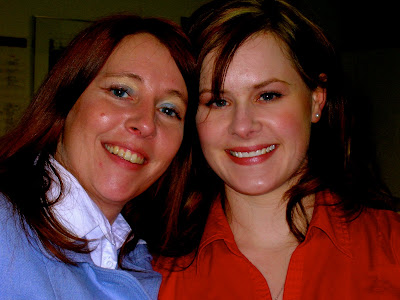 Ronnalie and I after the Ceremony 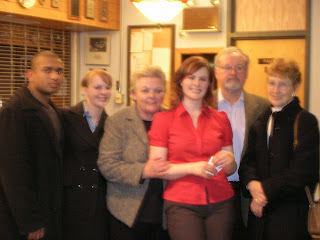 With part of my Entourage... doesn't my Mom look happy?
Posted by Linda at 16:19

YAY FOR YOU LINDA! Congrats on the whole ceremony! WOW, sounded like it was fun. Aaron and Sam and I would have been there if we lived closer! For sure! So you are going to be doing your stuff for three months??? WOW! We will definitely come visit you! Any chance of you coming early so we can see you? We can totally take you to the island....won't cost you a thing! :) Miss you!
Have a great day!
C

aahhhhhh, thanks!!!! It would have been lovely to have you guys there, you'll just have to come to my basic graduation - I think it is July 12th.. but I'll keep you posted.

As for my travel orders I have no clue yet, I'll seee what I can fanagle and perhaps we can chill before hand!

Lulu, you look so fantastic and happy :) congrats.